How to stop making business decisions out of fear 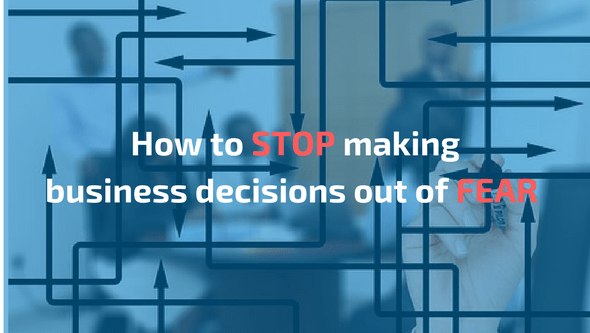 “You’ll never know how far you can go unless you’re willing to go too far.”

Inspiring words, definitely – but also maybe a little scary. The fear of going too far is one that I believe holds a lot of people back from accomplishing what they’re capable of. That’s certainly been my experience at MyITpros. I’ve watched employees shy away from opportunities out of fear of failure, and I personally have done the same thing. More often than not, I’ve ended up feeling that that saying no was a mistake.

So today I want to encourage you to say yes – even when fear kicks in and pushes you in the other direction.

Let me start by sharing an example of a time when I said “yes” even though I wanted to say “no,” and showing you how taking that risk ended up paying off.

Our marketing specialist and I were contemplating whether to participate in a high-visibility industry event where we could promote MyITpros. Lots of the people attending would likely be good prospects, so why not?

Well, there was just one problem: It was going to cost about 10 times more than we’d ever paid to participate in an event. Additionally, we hadn’t had much success doing these types of appearances in the past, and I was frankly more than a little afraid to spend the money.

In the end, though, we decided to seize the opportunity after all – and as of last week, we’ve already received several strong leads from the event. If those leads develop into clients, which looks very likely, the resulting revenue will more than pay for our attendance!

Get support when making brave decisions

Our decision to attend that event turned out to be the right one. But how do you know whether it’s worth the risk to say yes? In this case, we used a time-honored decision support tool: asking other people.

When I asked members of our sales and marketing team to weigh in, they all saw far more opportunity than risk. Unlike me, they didn’t think past experience was necessarily a predictor of failure, and they strongly encouraged us to attend the event.

Their faith in us made all the difference in terms of helping me see that there was more to be excited about than to be afraid of. This realization enabled me to move forward with confidence, which turned out to be one of the best professional decisions I’ve ever made.

Look to top companies for inspiration

I’m really glad to have a team in place at MyITpros that sees the value of taking a risk. Of course, not all risks are good, and not all fears should be ignored. There are times when you’ll weigh all the factors and decide it really is best to say no, but for the most part, I think choosing reasonable risk-taking over fear is a good thing for a business. I’m glad that’s what we do at MyITpros – and we’re in good company. In fact, some of the most successful organizations operating today encourage smart risk-taking. Amazon, for example, has a rule it calls “the institutional yes,” which basically dictates the default answer to an employee’s great new idea. If a manager wants to say no, he or she has to explain why. Basically, Amazon makes it easier to say yes than to say no.

Another example is Procter & Gamble, which gives something called the Heroic Failure Award to the employee or team that suffered a significant failure but also gained the greatest insight from that misfortune. This approach goes back to what I said at the beginning of this article: You’ll never know how far you can go unless you’re willing to go too far. I think it’s great that P&G rewards people for doing just that!

How about you? How willing are you and your employees to say no to fear and yes to opportunity? I’d love to hear from you, and I hope you’ll share your stories with us.

As Chief People Officer, Bill builds and retains the team that makes Integris.