Getting Out of Your Own Way

Rashaad Bajwa assumed he’d graduate from college and head to law school. A fortuitous speeding ticket changed that fate. At the time, Michelle Yan (now his wife, Michelle Yan Bajwa) was interning for a law firm. Bajwa would occasionally pick her up from work, and the firm caught wind that he had a knack for IT. When a lawyer offered to get him out of the ticket in exchange for IT help, Bajwa delivered – setting up a one-modem proxy server to get the firm online.

His first unofficial client was so enthralled with the new networking capabilities that they started recommending him to other law firms. It was 1997. Bajwa’s parents bought him a suit. He quickly learned that he could charge $40 an hour compared to the $60-$80 other, legitimate IT companies were charging at the time. Then he landed a $20,000 project. By the time his speeding ticket went to court, the prosecutor was his client too.

Instead of paying the ticket, Bajwa started building a business. Law school was off the table. Integris was born.

The problem with Integris, the MSP Bajwa founded as a senior at Rutgers, was that the company wasn’t speeding along as fast as he was the day he got pulled over. In the early 2000s, Integris was a solid lifestyle business. The company had grown organically to about a dozen employees through a reputation for good work, the same way it grew in the early days of servicing law firms. But Bajwa was getting restless, and in his early 30s, he was at a crossroads. He wasn’t ready to sell, but he didn’t know how to grow. “It wasn’t the money, we were making good money. It was the time and the mentality that if I walk away the whole thing will crash because I’m so important. That wasn’t true, but I had created it that way. I didn’t properly develop people who could watch the fort while I was gone.”

“If I walk away the whole thing will crash because I’m so important. That wasn’t true, but I had created it that way.”

He joined HTG Peer groups in 2012, in conjunction with hiring his first sales rep, and he assumed this would teach him how to grow by showing him how to structure a sales team. Bajwa had matured since he donned that first suit as a college senior, but he admits he still had a lot of growing to do as a business leader. “It is true in that you do need a sales engine. But what was really keeping us from growing wasn’t sales. The big problem was that I was a bottleneck,” says Bajwa. At that point, he was micromanaging just about every part of the business, from reviewing timecard entries to handling accounts receivable to being the primary relationship holder with clients. He admits there wasn’t an “a-ha” moment to realizing he needed help letting go. Instead, his peer group kept hitting him over the head with that reality. “It’s almost a disease some entrepreneurs have, being these control freaks. My highest and best use has changed from being one person who gets glory out of doing everything to getting glory from developing others.”

Admitting you need help delegating, and therefore need to hire to grow your company, is easy. Taking action requires a completely different mentality. Bajwa talks about the importance of always having “excess capacity,” and transitioning from a bank account that provides a safety net to investing and having faith the organization will grow. Integris had the cash on hand to start adding to its headcount, but Bajwa speculates his real fear was something common among other MSPs – he didn’t want to hire people because he was afraid he’d have to fire them. What if you bring on a new employee and then the work coming in dries up and you have to let that employee go? He had to recalibrate this mindset to ease his anxiety about hiring, and he started looking at new employees as a year-long investment instead of framing a new salary as an immediate expense on the books. “The general wisdom is that entrepreneurs are big risk takers. That’s a complete fallacy. We small entrepreneurs tend to have a tight handle on the pocket book.”

When Bajwa started down the path of delegating, it was easy to let go of things like time sheet reviews. He admits, “Literally, it was an addiction; it was no good for me.” When it came to his control over purchasing, letting go was harder. That directly impacted his wallet as the business owner. What if an employee spends too much? What if an employee steals from you? The same nervousness applied to client relationships. Bajwa had built his company on his reputation, and to this day, the company’s mantra is “Your reputation is your wealth.” Now he had to put that reputation in someone else’s hands. Even getting out of the technical side of the company was hard. Bajwa grew the company with a value system built around how much it could fix, so he set a goal for ConnectWise billable time reports to show a zero next to his name. Letting go took time, and Bajwa often felt like he was taking one step forward and two steps back. Today he’s so focused on the bigger picture, higher impact issues within Integris that he doesn’t even know if he has a ConnectWise login. Now, “it’s about allowing others to be the primary heroes at Integris.” Empowering his employees not only made it easier for Bajwa to take vacation time, it boosted employee engagement too. He says, “When employees were asked to do more and step up, not only did the organization grow, but the employees’ connection to the company grew too.”

FREE YOURSELF FOR BIGGER & BETTER THINGS

Today, Integris is growing at a healthy double-digit rate and has nearly 40 employees. The company covers the Philadelphia, New York, and New Jersey metro areas, and is the largest SonicWall Security-as-a-Service (SECaaS) provider in the Northeast. Integris has expanded from servicing law firms and now has a foothold in the SMB, healthcare, financial services, and nonprofit verticals. Bajwa now delegates just about everything other than recruiting, hiring, and the general leadership needed to move the company forward. He estimates about 30- 40 percent of his time is spent on hiring, a task he feels strongly about keeping for himself.

With all of the time he freed up by getting the company to run without him, Bajwa launched Bizratings, a review and rating tool currently being used by more than 20,000 companies. It’s not just a side business; it also helps Integris track what customers think about the company, what employees think about the company, and what employees think about their relationships with customers. Additionally, Bajwa founded the Integris Tech Academy in conjunction with Mercer County Community College. Founded in 2017, this co-op offers paid internships to students and allows Integris to build its talent pipeline (because according to Bajwa, the company is now always hiring).

Bajwa has come a long way from that speeding ticket and the suit his parents bought him to sell internet connectivity solutions to law firms. “A lot of entrepreneurs have big egos, and we tend to not listen to advice. We think we can do everything ourselves. We think because we’re the best we are going to get the best results if we do everything ourselves. Get an executive coach, a peer group, other business people – just find people who are not you who can give you a dose of reality.” 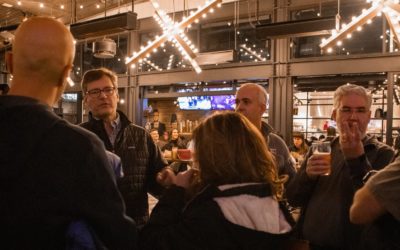 What It Means to Invest in Your People

As the head of HR and Recruiting here at Integris, I spend a lot of time thinking about our ideal job candidate. We’re a fast-growing tech company focused on premium service, so we must hire people who are more than just technically proficient. We’re also looking for...

Being a “People First” Company: How We’re Walking our Talk

All companies say they value their people. But it's one thing to say you put people first and quite another to actually act on it. These days, no company can afford to fall short on employee engagement, and that's especially true for tech-oriented companies like... MSP vs. MSSP: Blend Both for Better Risk Management

We often get questions asking us about MSP vs. MSSP. MSPs and MSSPs are frequently confused, but there are significant differences in their offerings. But that also doesn't mean you need to pick one or the other – you can actually get the best of both worlds. In this...